skip to main | skip to sidebar

A creepy, war-mongering albino who knows jack-shit about the economy.

Nuff said.
Posted by keshmeshi at 6:56 PM No comments:

Quotation of the Day

This is a pitbull with lipstick? More like a cowering chihuahua.
Posted by keshmeshi at 10:19 PM No comments:

I decided to hold off on commenting about the Bristol Palin is actually Trig's mother brouhaha. It seems to be cleared up, but I still have a question; a question that I want to see answered.

That question is: What the fuck was Sarah Palin on when she decided to get on a plane after effectively going into labor?

If there isn't some weird coverup going on here, then what is it? What's the reason?

1. Governor Palin hadn't actually gone into labor and made up the story to have an excuse to leave Texas early. That doesn't make much sense since she delivered her speech anyway, but it sure would explain why the hospital where she allegedly gave birth doesn't have a record of that birth on that date.

2. Sarah Palin wanted Trig to die. She couldn't abort him, since that would go against her pro-life principles, so she decided to get rid of him by other means. Such behavior is hardly new. It's ages old, dating back to when abortion was illegal and less safe than it is today. And check out that timeline; click to enlarge. 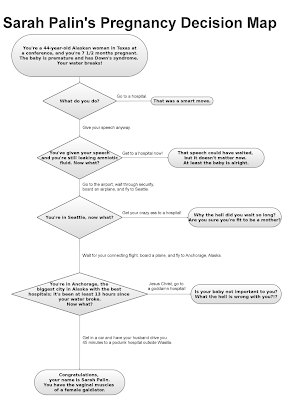 No sane person acts like this. No fucking way.

So which is it, Sarah? Are you lying, as you lie about everything else, or were you trying to kill your baby?
Posted by keshmeshi at 6:49 PM No comments: